With the lessons of our fathers ...

A radio operator in Gen. Tadeusz Anders’ Army, a man who has experienced Siberia and emigration from the country he has fought for. I met Mr. Piotr Sułek in the Polish shop as he asked me for help with choosing a cheese. We began to talk, and so I discovered the extraordinary story of the Sułek family. ..


MMW- Another wave of emigration, and with it a lot of difference.
Peter Sułek- Pub...we sat in the pub on a Saturday. One of our Polish friends (because the English did not befriend us) just got an English citizenship and started to sit at a separate table. And so, sitting alone, an Englishman walks past him and asks why he doesn’t sit with the Poles, to which he replies that he has just received and English citizenship and is now an Englishman. For this the Englishman replies: "Maybe you do have an English citizenship, but to us, you will always be a Pole".  Between you and us, there is the difference that we built the Polish community here. Poland was still occupied and we Poles were 2nd category here. The thought of going back to Poland was frightening: we were automatically considered to be Western spies and anti-Communists.


MMW- Is this why you  never returned to the country?
Peter Sułek - Many of my friends returned. They promised that they would write, but no one wrote. And for this reason I was afraid to come back.


MMW- So you had to learn to cope with life here?
Peter Sulek-You have to cope anywhere. We, Poles, are able to work hard and are honest. But we must also be vigilant observers. Kurgan (Kurgan - peripheral city, in the eastern part of Russia, the Tobol - Irtysh tributary) spring came, and with it came the overflowing of the river. Building a bridge was necessary. They were looking for carpenters, because it was essential to firstly sharpen the hatchets, then work on the wood. I've never been a carpenter. I raised my hand, as I had walked with my father through the streets of Grajewa and seen men sharpening knives on the street. So I sharpened the hatchet as well as the wood .


MMW- But our conscientiousness is sometimes a downfall.
Peter Sułek-  When I was in a labour camp in Russia, there was a hut next to our barracks with Russian criminals. People said, that once they played cards over the head of the commissioner. The loser had to bring his head, or else they would be decapitated themselves. I heard a lot about it yet did not see it, but the commissioner’s head was in fact brought by the loser. One night one of them came to us and said "You Poles, a healthy race, you work too hard, we get told to work like you”. We were terrified, we told him that we're working for bread. However, this criminal was intelligent, he understood us, and we understood him. He said: “Do less, complain about work with the coal and iron”. So we started to complain, they believed us, and we started to slow down. No more Russian criminals came to us again.


MMW- So you survived.
Peter Sułek – The point in life is, to believe that you can survive. In Pietro-Pawłoski there were 12 of us:  Jews, Poles, Czechs, and blacksmiths were in need. Vaclav Cieslak from Bialystok raises his hand, so I ask him: "Are you a blacksmith?" And he replies, "No, but I know how to shoe a horse". So I also volunteered. They took us to the iron. In Siberia there was an electric system which pumped the air, and with this we made metal pieces (a metal square approx. 20/30 cm). During each shift 80 to 100 metal pieces had to be made. Night shifts lasted 12 hours, all for that 800 grams of bread and a cube of sugar. Our portion was the largest, the smaller ones were of 600g, 400g and 200g. And when spring came, we ate clover. Poor women from nearby villages came and sold the clover to us on our way to work. Ah, that clover smelled like onions ...


MMW- Despite so many years in emigration, you speak  beautiful Polish. Could you share some advice with us on how to preserve our Polish identity and pronunciation?
Peter Sułek- After the war, maybe in the 60s, me and my wife were at a Saturday Polish School, I looked at all the little children, who instead of playing like their English peers, came here every Saturday to learn about Poland. We sat in the audience during the show that the Polish children had prepared, and I said to my wife, half touched, half with a laugh: “Look, still with diapers dragging behind them, and they know the Krakowiak dance”. If we were proud of being Polish, we will be respected, and respect is very important. Poles must begin to think and talk about Poles positively, so that others see us in that way.

During the turmoil, we Poles can beautifully to act together, because we focus on our selling point and we want to trust each other. On the other hand, when the peace comes, we start focus on our character flaws and we lose our trust and confidence. Poles need a leader who will keep a discipline. Over the years, Poland as a home was attacked by others. We had to deal with: partitions, then with first and second world war, then with communism. They all wanted to destroy our country and our Polish culture and language. But Polish National Anthem has its rights:


”Poland has not yet perished,


So long as we still live.”


That's why it is so important to remember, that we Poles being over the world, we are ambassador of our country. Poland and the Poles we have so much to offer.
I have been awarded with the Valiant Cross, it is not a secret, it is a privilege. This is how I feel and my grandson also says so. The best time of my life was spent on the front line. I was respected by officers. I knew what was going on in the world because I was a radio operator. Being on the front line, Lt. Jerzy Olszewski asked me how to call the boys over in Russian, we say rebyata, and he persistently and wrongly lyagushka, or frogs, oh what a laugh we had. He was from a place called Lwów, and everybody liked him. And this is the respect and affection what life is about.


MMW- Ludwig Wittgenstein said, “The limits of my language are the limits of my world”.
Peter Sułek- Currently, the world is demoralised. That's why I do not carry money with me, I carry handkerchiefs (laughs). But in all seriousness, please remember that what we say, although it may be absolutely wrong and unfair, it always indicates of how others see us. My mother came to visit us. For breakfast we had cereal. My mother flooded her cereal with warm milk so it turned to mush. She told me, “Son, you eat such things here in the west, I give things like this to the pigs". My son Antos, then about 7/8 years old, replies: "Dad, your mom, she is a communist” (Sułek laughs).
If silence is gold, then what are words? An English bishop once said: "Leave your thoughts for yourself. However, you Poles, what you think, you say, and that may lose you." I have a Polish character, I am 100% truthful, yet it’s not the Poles but the British who were able to build colonies. I'm not suggesting that it was good but the English, like the Jews can do business. Poles say, “if you do not like my product, go to another”. The Jews, however, and the British were always kind, always gave extra. Do they give? I do not know, but at least  they say they do. “Whose car you are travelling in, his song you sing,” they say. Poles are able to work hard and honestly for others. But we must remember, whilst employees are praised for reliability, the business owner gets respected for it.
Posted by Marlena Weber at Friday, July 03, 2015 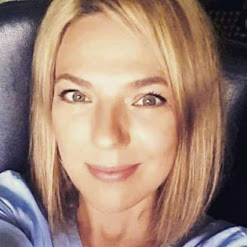 I have got Diploma of Social Skills and Journalist. As a Journalist I specialise in news stories. For three years, I was a co-originator and writer with 2B North East, a monthly magazine published by the North East Polish Community. I am proud about the fact, that 2B Magazine was permanently placed in the Discovery Museum as a symbol of Polish immigrants in North East. As a Journalist Freelancer I also cooperative with BBC and Polish media. As I was involved in the European Social Fund Programme. In collaboration with The North East Strategic Migration Partnership when the University of Sunderland was leading a two-year research project to test and deliver solutions to the employment and skills issues facing The North East as population trends change.I was invited by ROSA Production Ltd to support Ridley Scott's Project called „Britain in A Day" Together with Healthy Communities Collaborative Facilitator we prepared two projects called ‘Sensible Woman’ and “Sensible Man” in which we were co-operating with the NHS, the SAGE Theatre, and the ‘McMillan’ organisation and also with Newcastle United and local media. The projects helped raise awareness of male and female illness which affects many thousands of men and women around the world. I was responsible for the festival’s Health Campaign, which included a well-attended Women’s Breast Cancer Awareness event with invited guest speaker and health professionals. I delivered feedback on this event in a paper I recently gave at the World Class Commissioning and Migrant Health Conference. I have also been very invoked in helping other Polish people integrate with their local communities in the North East, for this it is important for me to have excellent communication skills. I was also coordinator of Made in Poland Festival. weber.marlena@gmail.com (0044) 7872526175